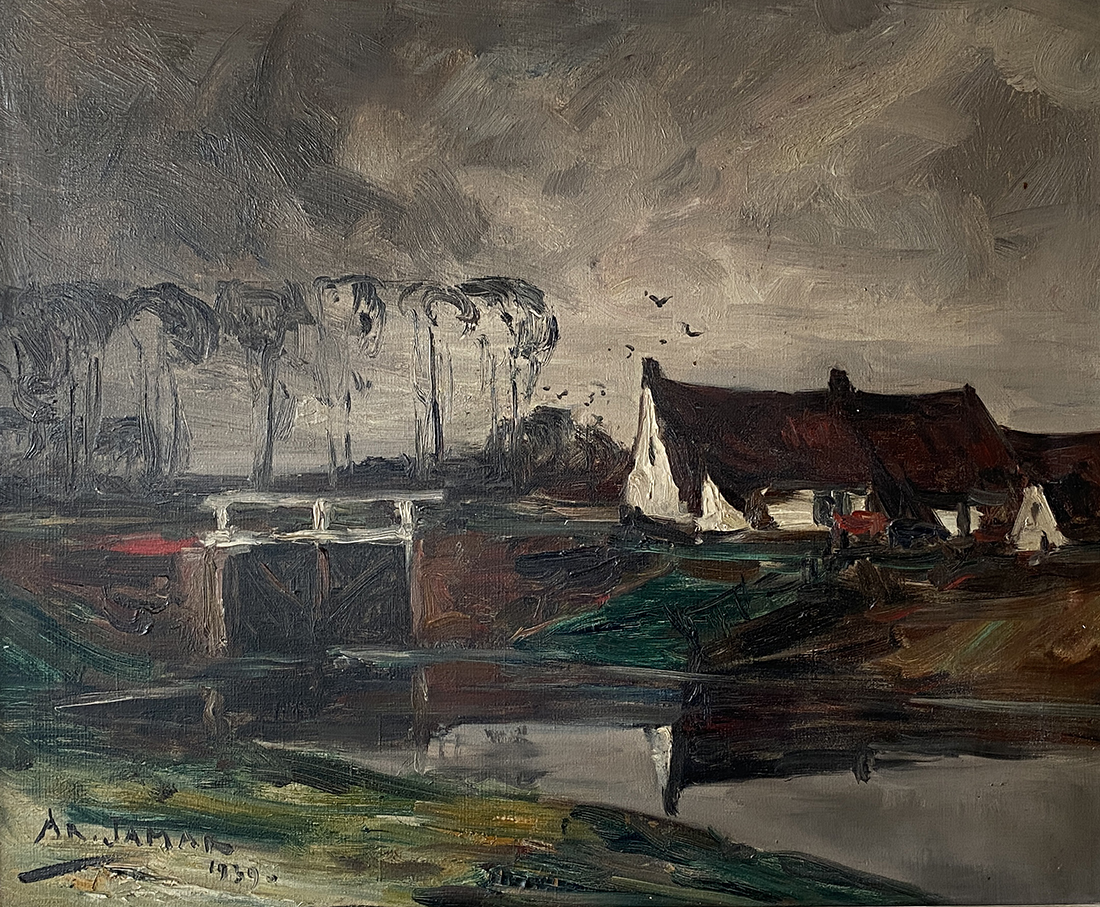 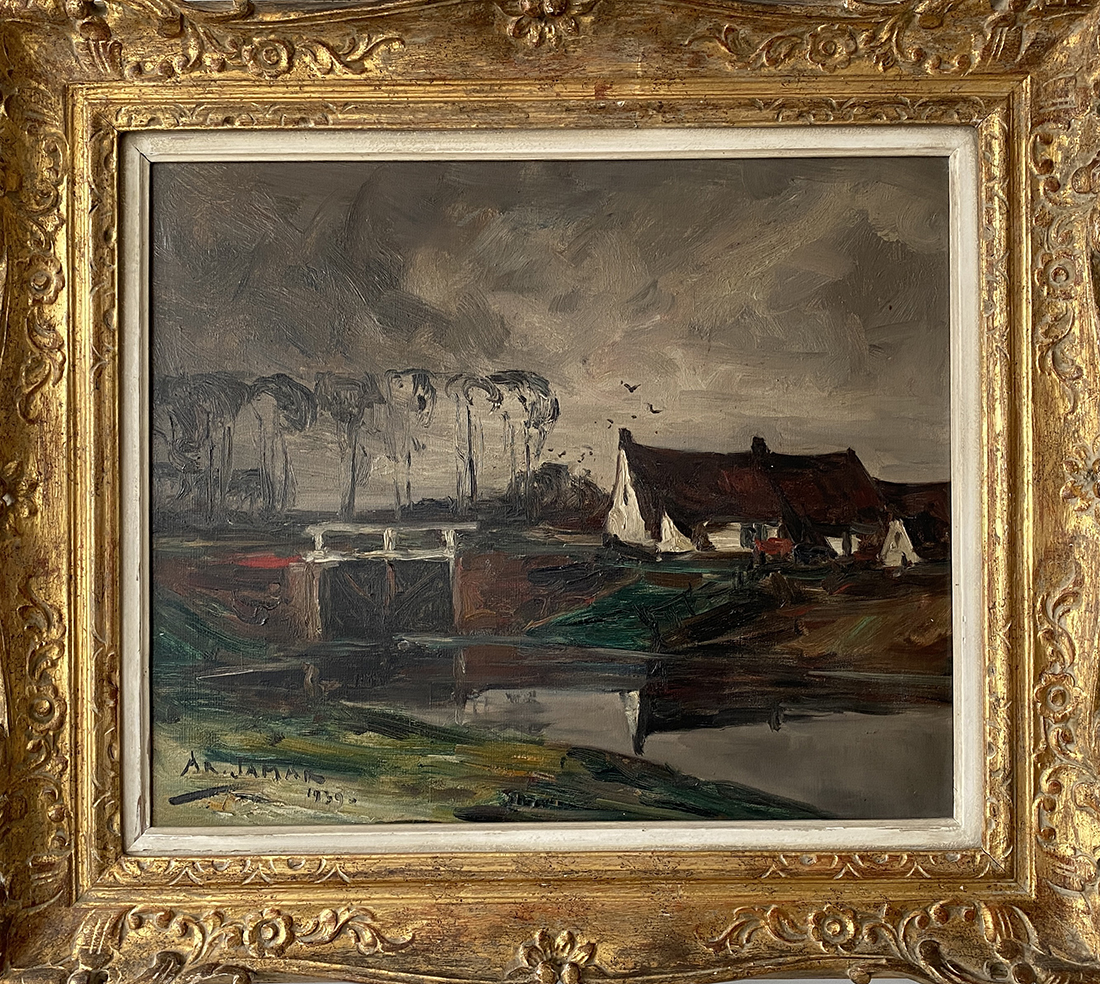 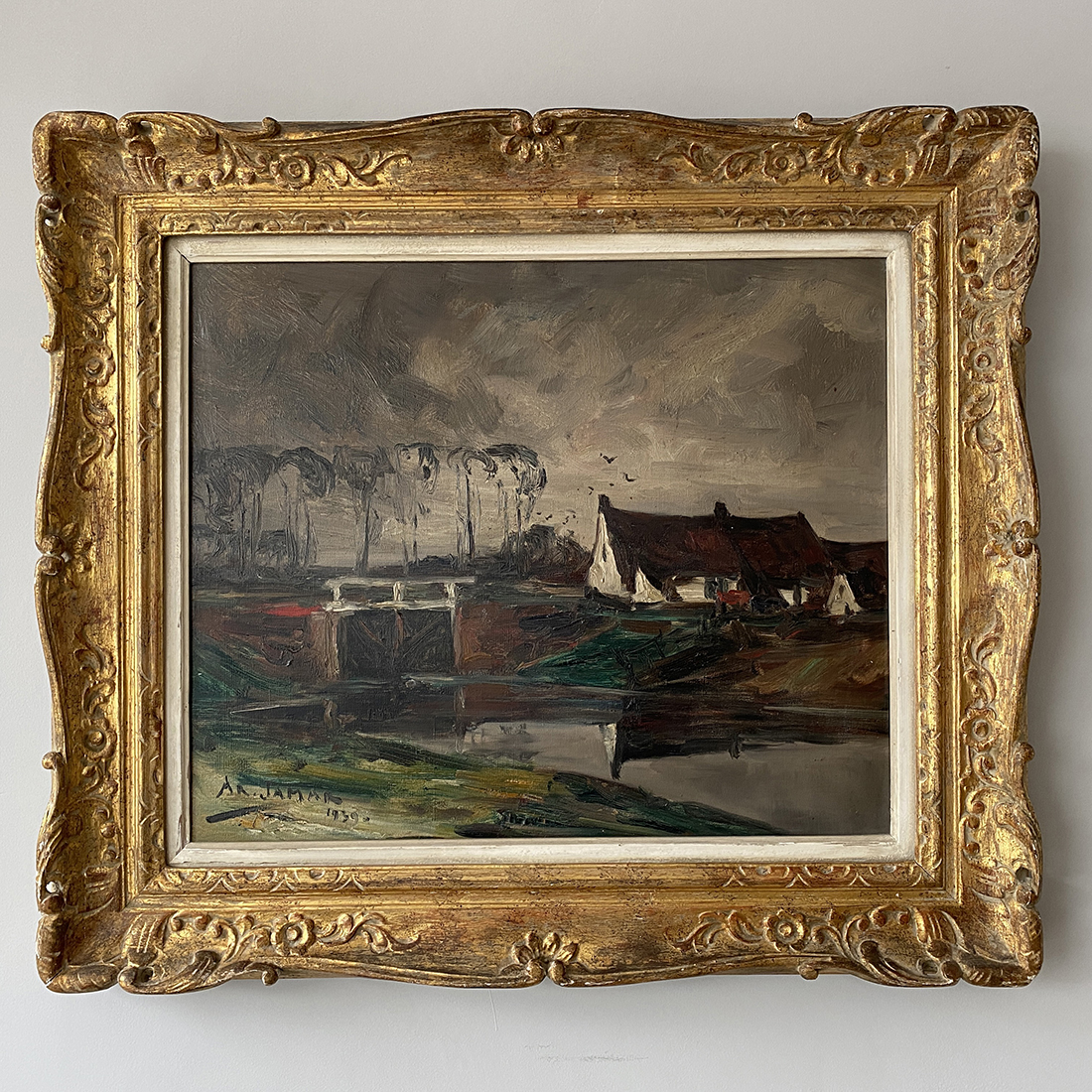 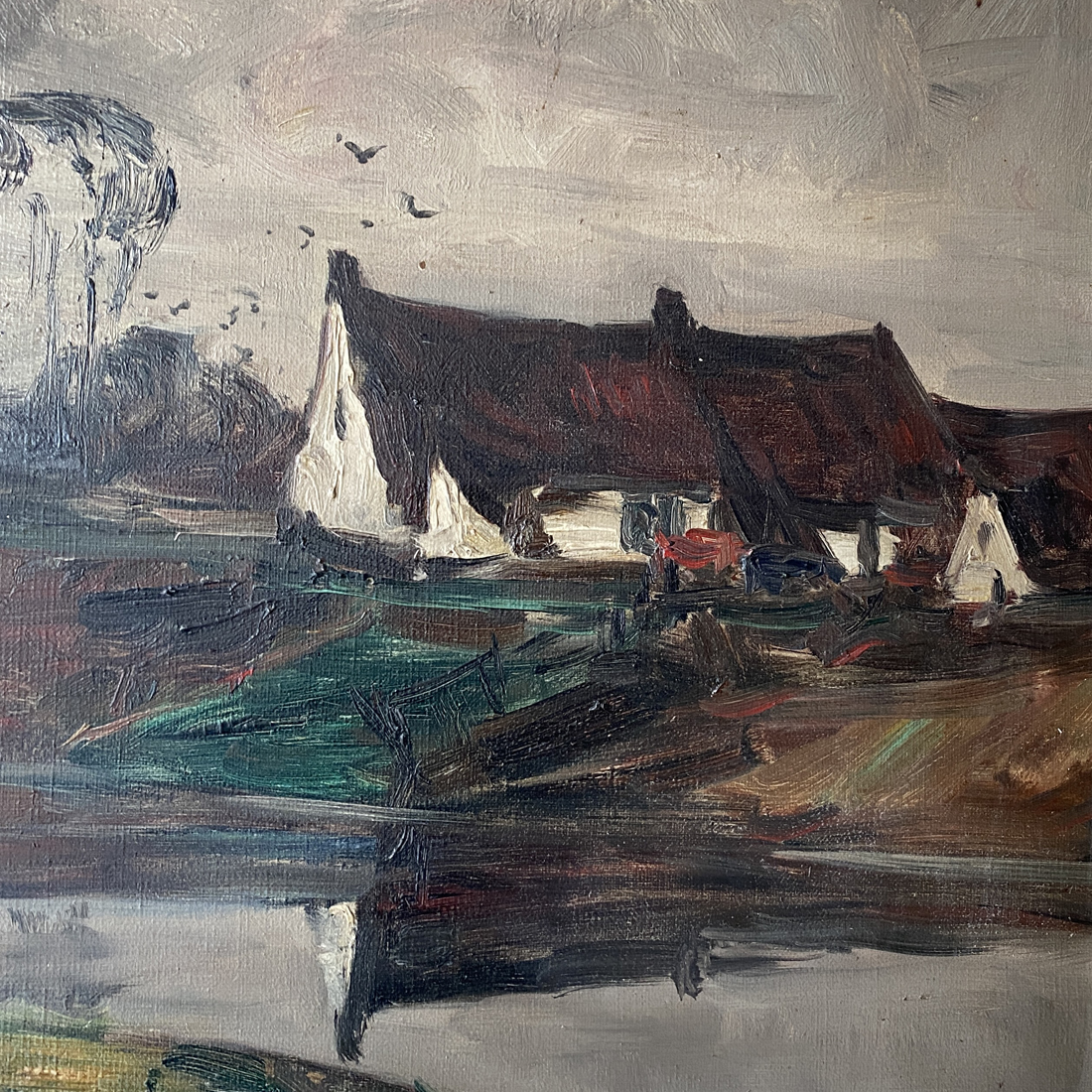 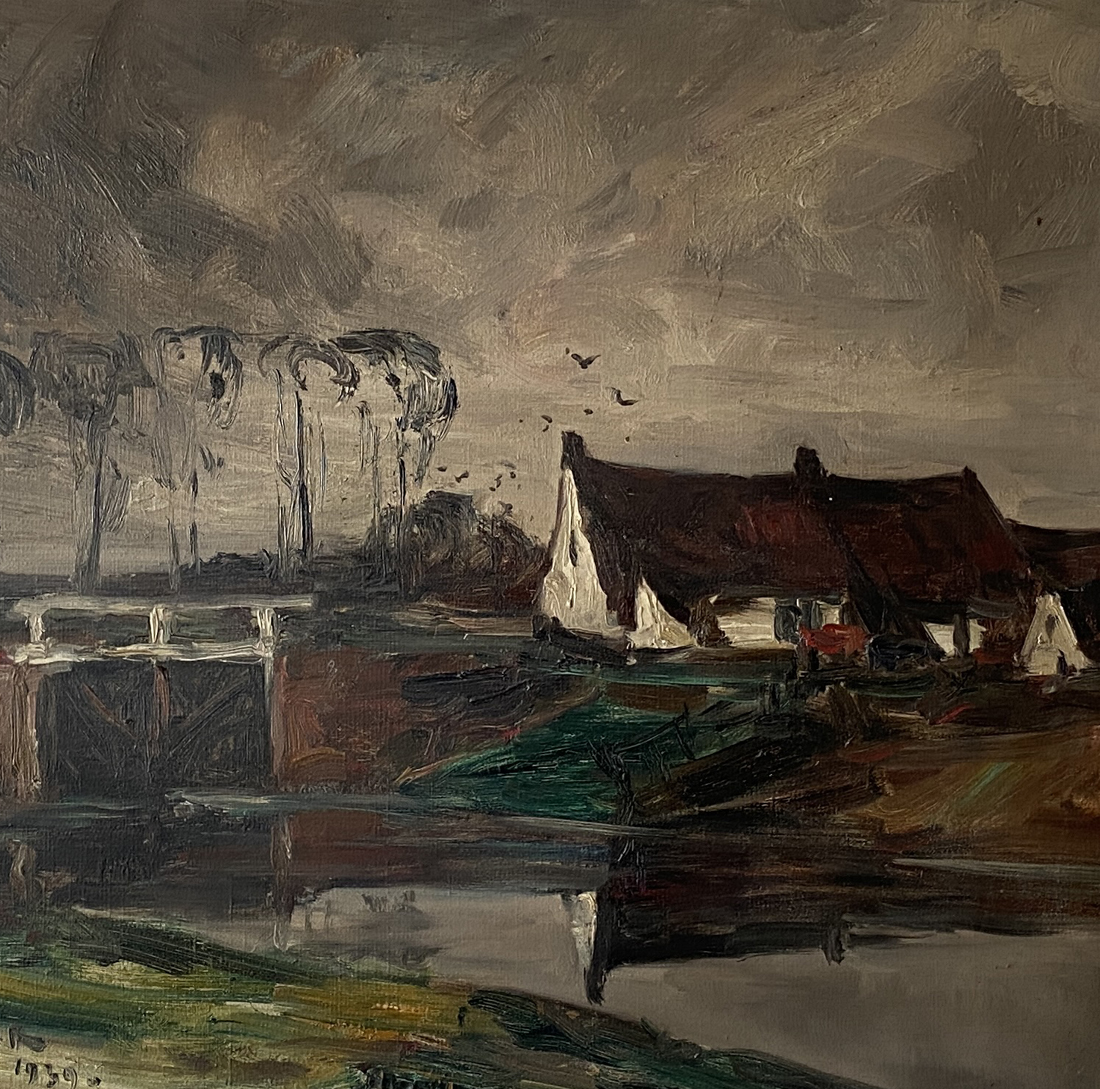 House by the Lock

Framed oil on canvas showing a view of a house by a lock on a cloudy day.  The painting is signed by the artist Armand Jamar (1870 - 1946) and dated 1939. It is mounted in a quality gilded frame and slip.

Jamar trained as a lawyer in his hometown and became a doctor of law. In 1894 he also took lessons at the Royal Academy of Liège,  where he was a student of Evariste Carpentier . He gave his first exhibition in Liège in 1900. In 1904 he settled in Schaerbeek in the former studio of Constantin Meunier . He also regularly participated in exhibitions at the "Salon des Artistes Français", where he received an honorable mention in 1904 and finally the gold medal. He also participated in the Brussels Salons (1910), Antwerp and Ghent. In 1921 he gave an individual exhibition in Brussels at the Cercle Artistique et Littéraire.

Jamar started as an impressionist with vivid colors and broad brushstrokes of landscapes, cityscapes, interiors and seascapes, many painted in the wild. His first works are influenced by paintings by the early Impressionists such as Eugène Boudin and Johan Barthold Jongkind . He also created a number of genre paintings about markets and factory life. Later he switched to a colorful expressionism and finally a freer brushwork, tending towards the abstract.

His encounters with doctor Louis de Winter, art lover and patron, from 1929 had a deep influence on him. From then on he was also interested in literary and metaphysical themes such as the history of Tijl Uylenspiegel , scenes from Dantes' Divina Comedia , episodes from the Old and New Testament (such as Stations of the Cross and the horsemen of the Apocalypse ) and battlefields from the First World War. . A Stations of the Cross is located in the Great Seminary of Bruges. Under the influence of Louis de Winter, the dramaturge Michel de Ghelderode wrote several articles about the works of Jamar and his symbiosis with De Winter.

He traveled extensively in Europe, North Africa and the United States. Like many of Carpentier's students at the Academy in Liège, Armand Jamar was sent to the Limburg Kempen near Genk on his advice . He was also fascinated by the North Sea coasts , including in Zeebrugge, Brittany and Zeeland .

Most of his works are still in private collections and regularly appear at art auctions, but some are still in museums in Antwerp, Brussels, Charleroi, Liège, Lille and Rouen.