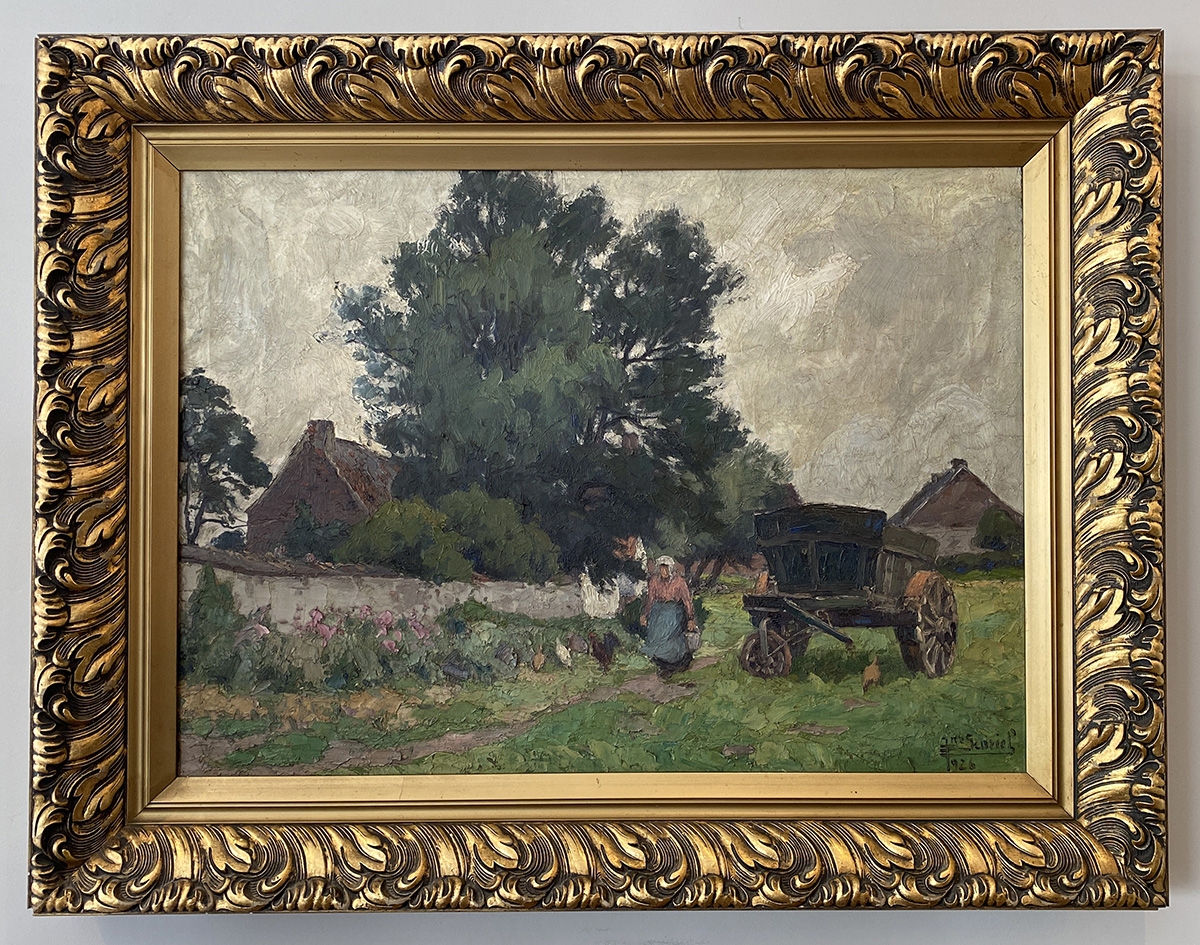 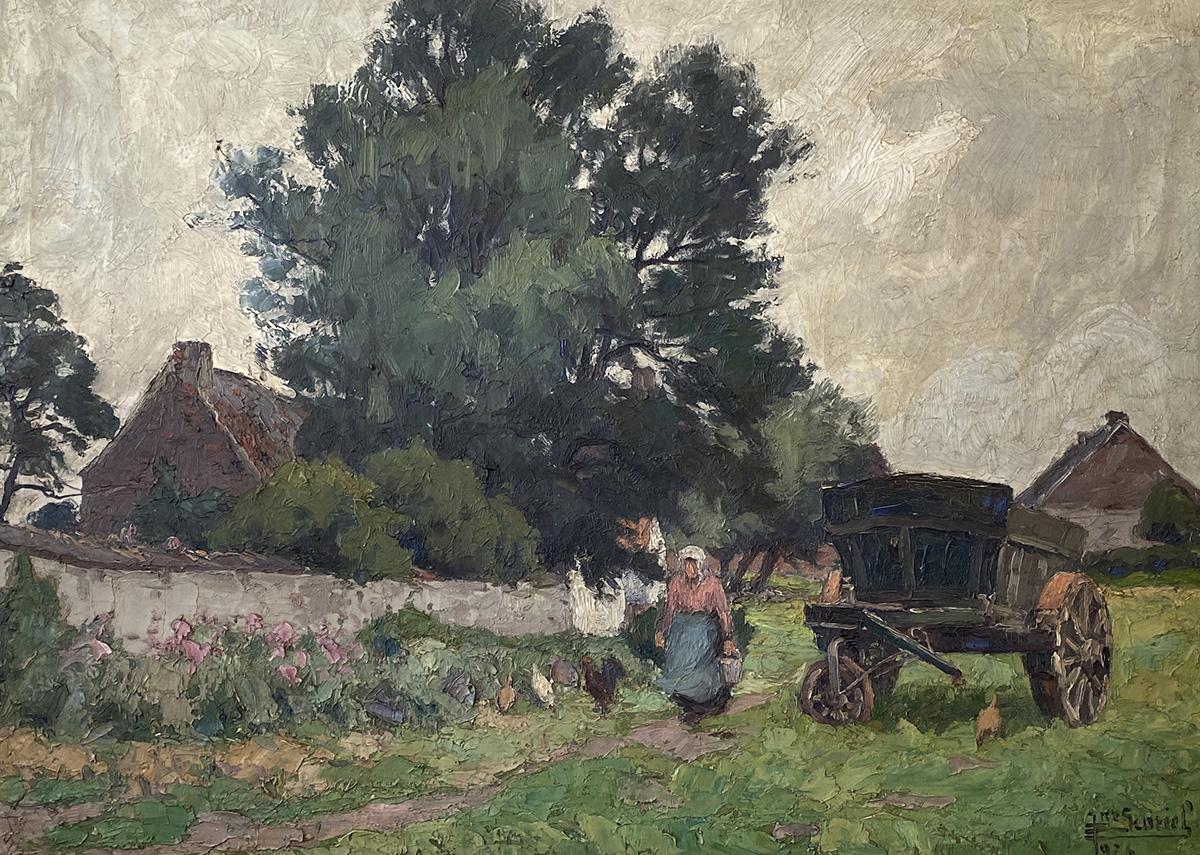 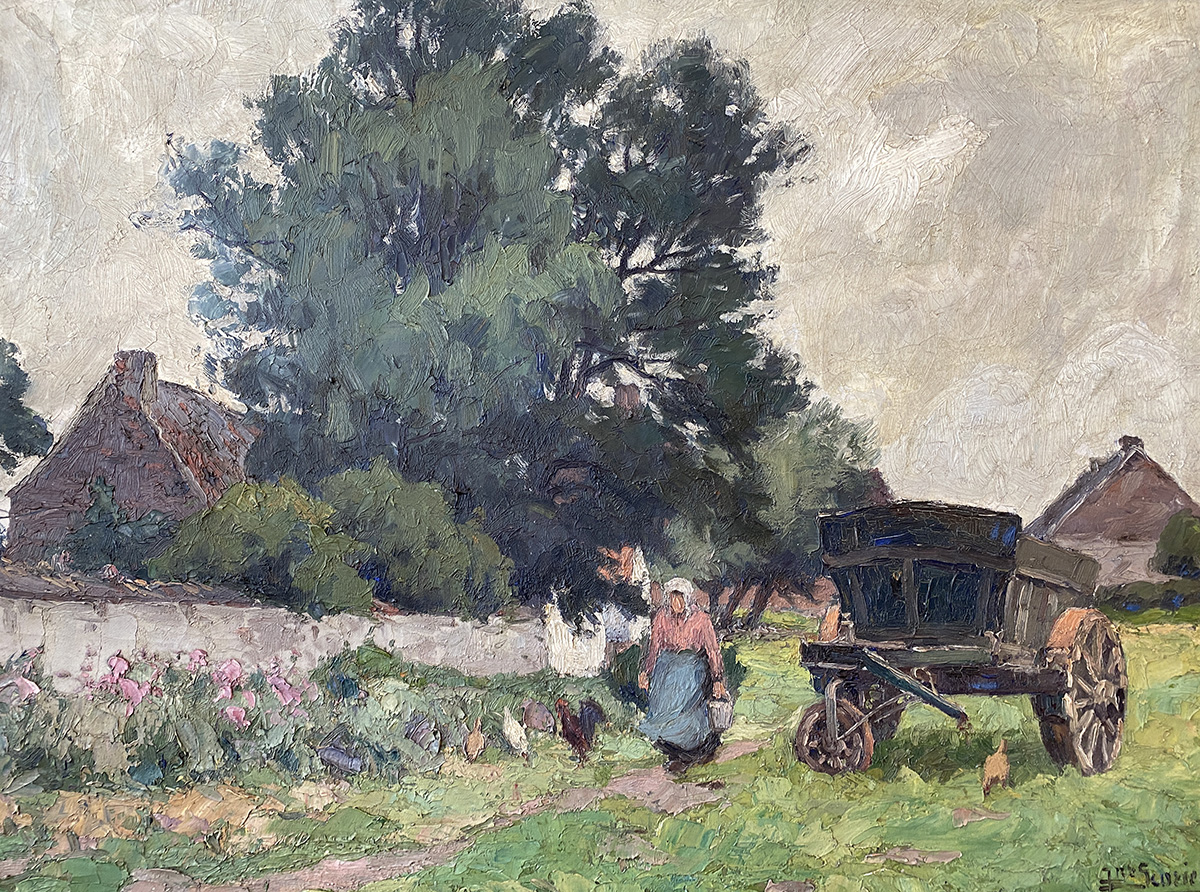 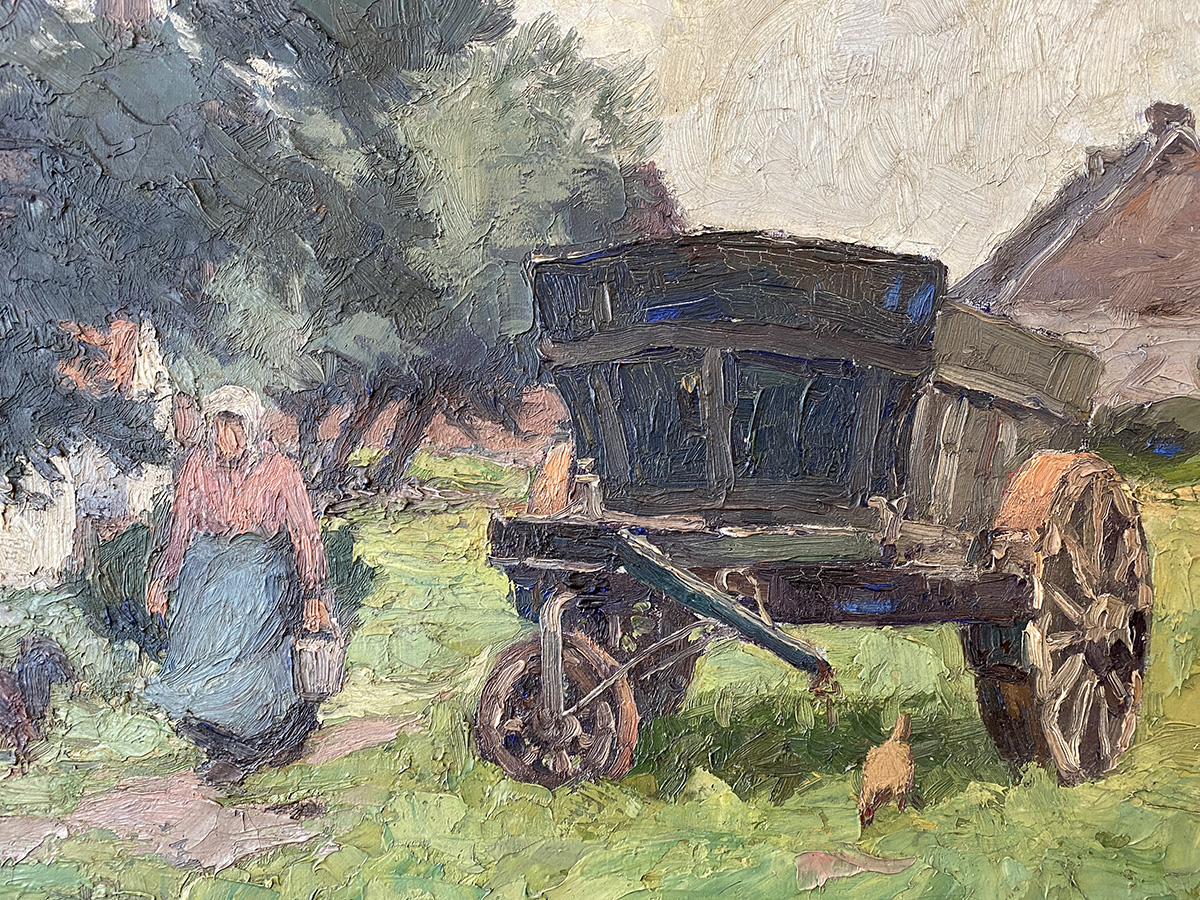 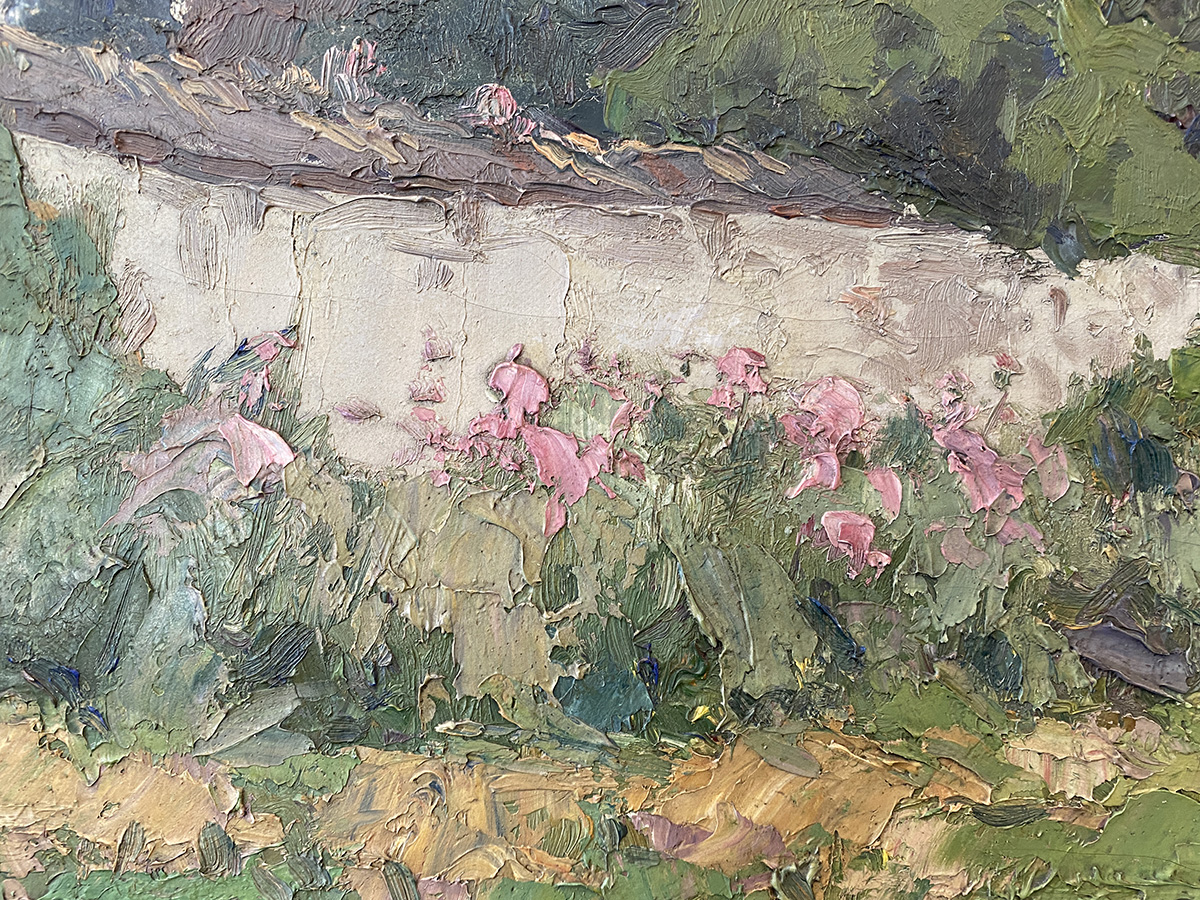 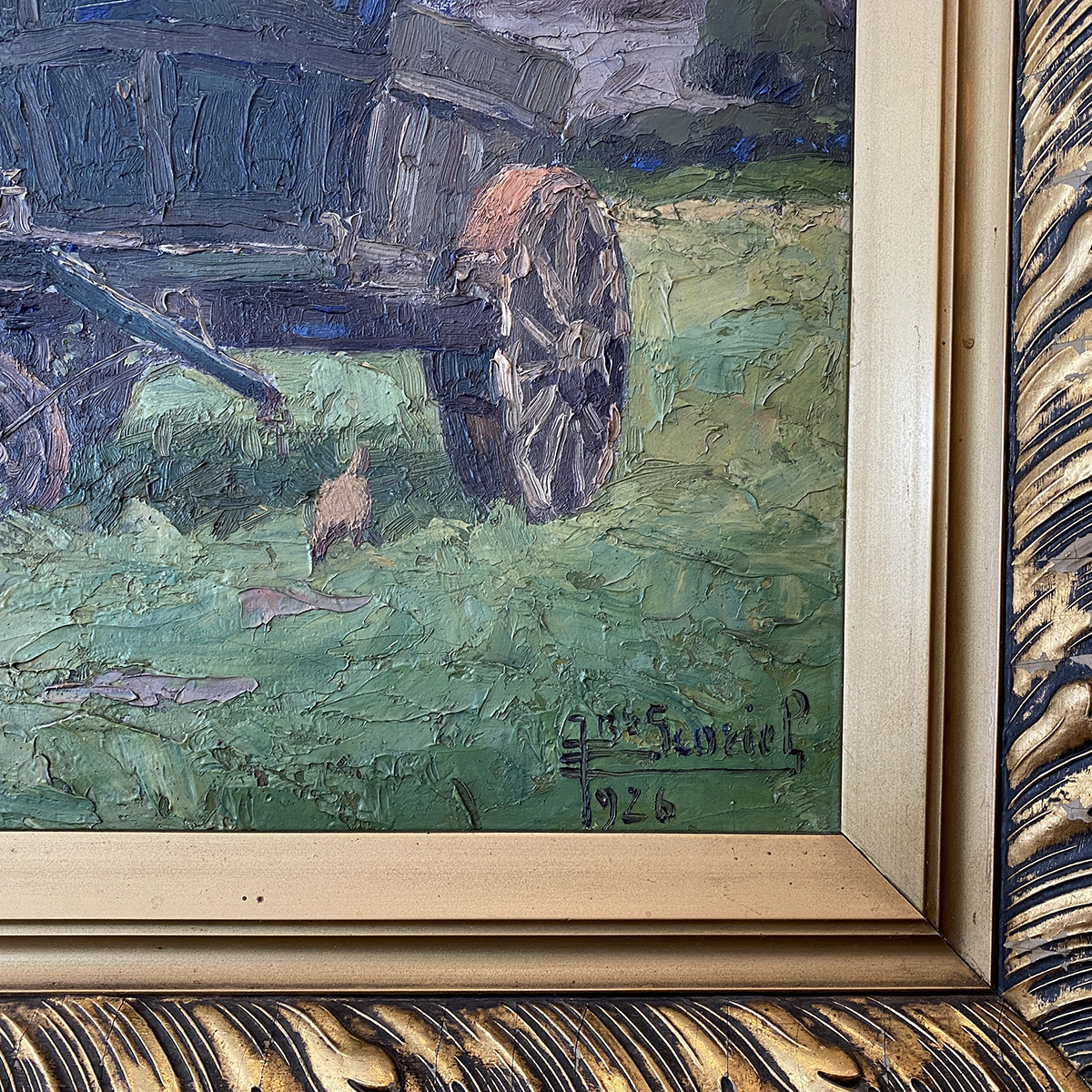 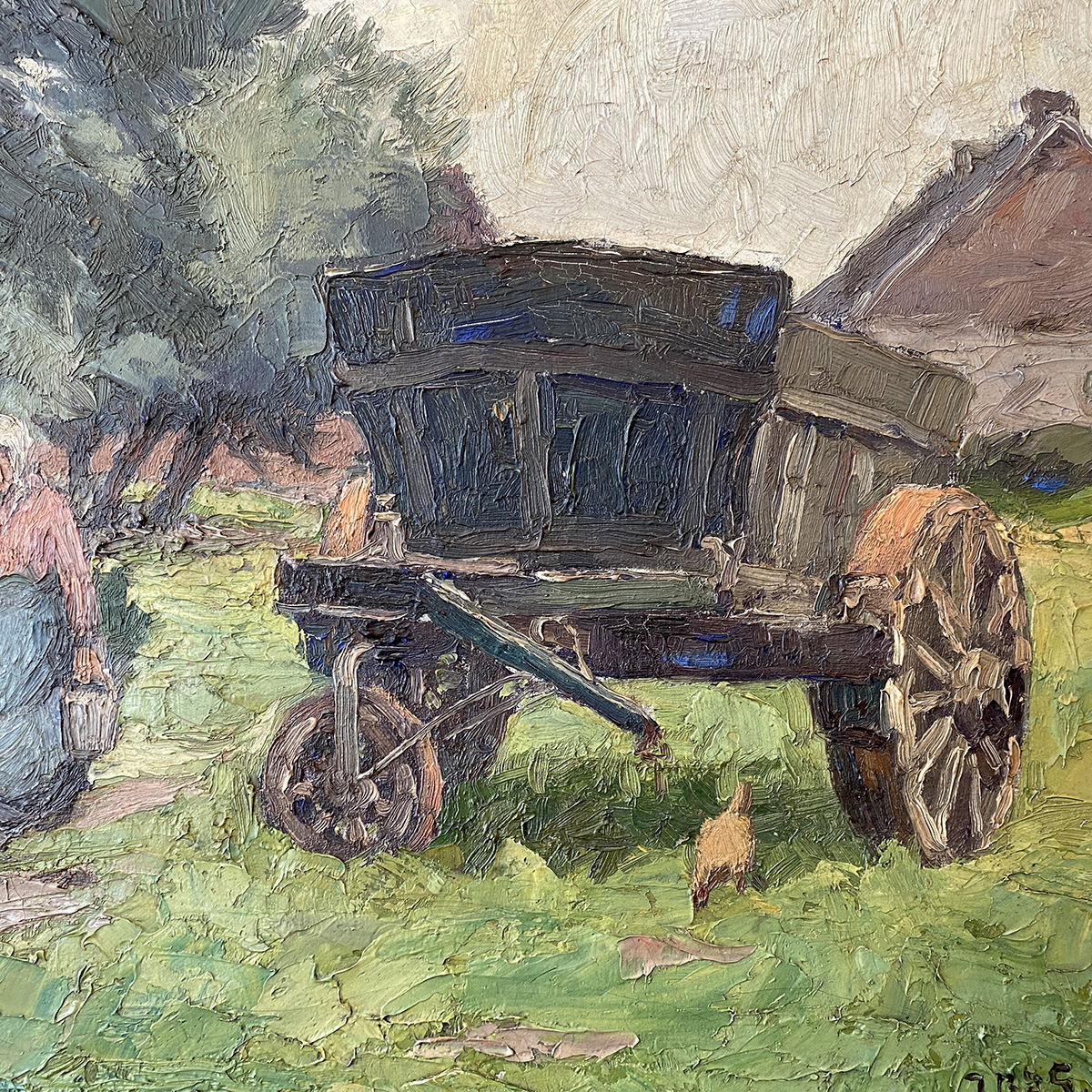 Framed oil on canvas signed by the listed Belgium painter Jean Baptiste Scoriel (1883 - 1956). The painting is dated 1926 and shows a rural scene with a lady with a cart and some poultry.
Scoriel was the son of a miner and of Flemish origin. He was only three when his family moved to Tamines and was orphaned at twelve.
JB Scoriel found his artistic vocation from an early age. Although from the age of eleven years old, he had to work for the family as a worker in a brickyard and then a foundry. Despite this he managed to enroll in the School of Fine Arts in Namur, led by Theodore Baron. He was taught by D. Merny and in 1905 making a very fast passage to the Brussels Academy. After an exhibition in 1906 and encouraged by a promising success, he then focused on the task he had set himself - to be a landscape painter. He attended for a while the workshop of landscape gardener Henri Deglume, then Félix Delahaut. He then went on to complete his training at the School of Emile Claus - a realist painter. Scoriel took most of his imspiration from the Sambre.
During the First World War, he volunteered with his four brothers and experienced the hard existence of the trenches. After being wounded in battle, he returned to painting in Dieppe where married his nurse. After a few years in Dieppe, he moved back to Tamines where he remained except for a few trips to Italy and France.
Scoriel was rightly called "Master of the Snow", no less than "Master of the Sambre". His predilection for snow was early. Very early in 1922 he felt the attraction, the power of evocation. The snow corresponds well to the gravity of his temperament. The Master had, indeed, an inimitable talent to seize and render the winters bitter of our campaigns, such as our ancestors knew them and lived, but also their seduction under an ephemeral ray of sun whose fleeting gleams colour. The Scoriel Snows are fascinating with their transcendent spell, their evocative power. However, they can not hide the rest of the work, so fruitful and diverse, the painter of the Lower Sambre.
During the exodus of 1940 he was refugee in the South, in Castelsagrat (Tarn-et-Garonne). The southern light dazzled Scoriel and left us some interesting pictorial testimonies. After the war, the artist revised his technique and shows a return to respect for line and form. Back in Tamines, the artist returned to his first love ,the Neiges and was inspired by his master Pierre Breughel. He is also inspired by his technique, uses a resin-based medium to dilute his now over-finished colours .
He became an eminent professor of great value who has trained a large number of future artists. Scoriel can realise, by simple means, vast landscapes. The colours are frank and effects very bright. His theory for his pupils was "Simplify!"
Bibliography taken from the Abécédaire des peintres du Pays de Charleroi, Frédéric Mac Donough, éditions Labor, 2006.